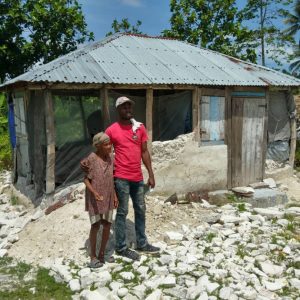 On September 16, 2021; after a great evaluation of the security situation on the way here to the South, Josonn and I (Wesley) flew on a mission to Les Cayes with Gospel, the driver for Foundation For Peace. Our goal was to evaluate immediate needs thereafter that devastating Earthquake that hit and damaged about 3 Departments in the Southern part of Haiti on August 14, 2021. The trip went smooth there then, we were hit by the gas shortage reality that took us a while to get our mission going mostly with that rented pickup truck. Straight to the job, we were shocked by collapsed buildings in Les Cayes and the environment. We went to Port Salut where we stayed to visit and evaluate the need. We were shocked to see how many homes were damaged in remote areas within Port Salut itself and nobody talks about it. We were in the mountains with no easy access roads. They were so many that we could not go to all of them, about 250, all in the valley between hills, on their top, and nearby. Despite all the damage, people welcomed us but wanted to know what we could do for them. They even mentioned that no NGOs, no officials came to see them in those communities. We had a much-respected guide who knew those areas pretty well and that made a huge difference.

They were mostly “ligh”t homes – built-in wooden posts, stones, and mud with a tin roof. They struggle to afford to rebuild their own houses as they had to deal with the water shortage, school re-opening, and no jobs. They mostly grow Vetiver (a grass used in perfume and essential oils) and have some livestock, but no source of water if not a river that was dry due to that drought. That visit itself brought them all great hope even though we had to be very clear on what we came to do (Evaluation) and no promises.

They received us very well over there; they put their hands on it to help start the home we chose to start with. Skeptical in the beginning, they received us well once they understood what we told them with clarity. However, they have to rely on the rain to store some water to use or take a 2 to 3 hour trip to a river. No casualties were reported in those areas we went to. But, the need is huge there. They mentioned that there used to be a “Letan” (pond) in the area and because of it they think there may be a possible way to dig well there that would save them tons and tons of hard work and long hours walking looking for water. That is their priority “WATER”. Madam Vesta, a 90-year-old lady, was very grateful to have received the first blessings there and shared a little of her stories with us while working there. But others we visited in similar conditions are still expecting their turn soon and pray that we come back again.