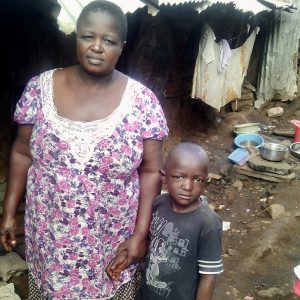 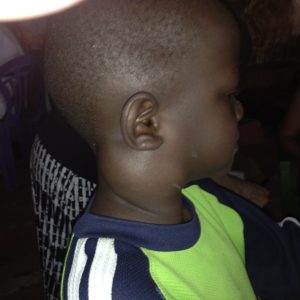 On a mission trip to Nairobi, the Foundation for Peace (FFP) President, Dr. Ken Culver met Veronica and her son, Michael. As part of the partner church’s outreach program, volunteer caregivers helped people with HIV/AIDS and their families. Veronica and her family were one of those families. They live in Mathare Valley, a slum of Nairobi.

Mathare Valley is a tough place to live. It is densely populated, and most people share a latrine and one source of running water with 7 or 8 other apartments or dwellings. Families live on less than $2 US a day. Electricity is not a given, nor are walls without openings to cold air. Cooking is usually done on one small burner fueled by burning paraffin. Veronica was lucky because she had several older children who helped earn money. Their multigenerational family of 8 shared two small very rooms in a rented shack.

Veronica was doing well physically then. But she had no funds for her youngest son Michael to see a doctor, so she was glad for the chance to be seen by the FFP team. She asked Ken to look at a lump that Michael had growing on his neck. After examining the lump, and finding that it was hard, not warm to the touch, nor tender, he suspected that it was a tumor.

Thanks to donors, FFP was able to provide funds for Michael to go to the hospital for evaluation. Sadly, the biopsy showed that Michael had non-Hodgkin’s lymphoma. The family had little money and there was no affordable treatment available in Nairobi. How could it be that a curable tumor on this vibrant 8-year-old boy would go untreated?

Ken returned to the US shortly thereafter with the mission of finding help for Michael. He made many phone calls and scoured the web. He finally found the OGRA Foundation, a Kenyan non-profit organization that treated lymphoma in children. He was able to connect OGRA with Pastor Oliver of Michael’s church. After reviewing Michael’s tests, they agreed to treat Michael with chemotherapy at no cost. He would have to live for in Kisumu, a city 4 hours away, for the duration.

Through the church, the FFP was able to pay for travel and food expenses for the four months while Michael and his mother were in Kisumu getting treatment.

Now, thanks to God, these NGOs, and their donors and volunteers, Michael is cured! He has grown into a fine young man who attends school diligently and has a passion for karate. The FFP continues to support him with his school fees, books, and even karate equipment. He has excelled at karate and even qualified to complete in Brazil! 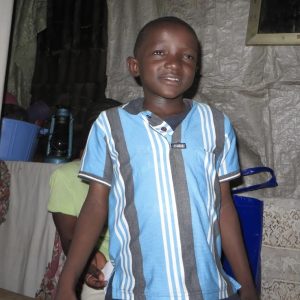 If FFP had not been there that day caring for all members of his family, it is likely that Michael would have not been diagnosed or treated, and he would not have survived the cancer.

Michael’s is one of countless lives that the FFP impacts through the generous support of our donors.  Our work is a wonderous combination of committed staff, passionate mission trip participants, many caring volunteers and generous donors, all with a dedication to service. By being there for communities, partnering with local churches and organizations, by listening to people, by making connections, the work of the FFP changes lives.

These are the kinds of differences that are made in people’s lives when we dare to go places where we don’t know what we will encounter… And it is a blessing to be able to return and see Michael and others like him doing so well!