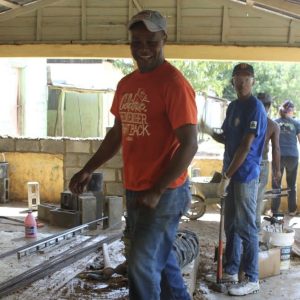 The sense of harmony in the air was undeniable. Peace and joy had settled over us like a blanket. We were a diverse group, from different corners of the world.  From the countries of Sudan, Ethiopia, Kenya, and the Dominican Republic, from the states of Alaska, Iowa, and Nebraska, God had drawn us here to this small community of Haitian immigrants in the Dominican Republic. With at least seven different cultures represented, we worked, laying brick and mortar in the heat and humidity of the tropical climate. And as we worked, we were reflecting on the incredible thing we had just witnessed.

You see, we are working to renovate a building here in this tiny little poverty-stricken village. What was once a hub of prostitution, drug abuse, and violence will be a community center dedicated to the education of the local people in order that they may learn trades and be able to support their families. This is the vision that God gave Pastor Alejandro, who prayed for years for the money to buy the building. God provided.

One of the first tasks was to demolish the stage in the center of the main area, the stage where women who, out of desperation, would dance naked in order to prostitute themselves and earn enough money to buy some food for their children. We grabbed some big sledgehammers and went to work. As the demolition continued, we were approached by a number of villagers who were anxious for us to know that the witchdoctor who had previously owned the building had buried some items beneath the stage, items he had used in order to exert control over the people of the village.  The various people who approached us from the community seemed to be anxious and excited, wanting us to make sure that we found the items and got rid of them.  As we finished taking out the stage, we found it: a hole in the floor full of several things, including a couple of different bottles and a long piece of rope which had a number of intricate knots in it. While we aren’t exactly sure what the witchdoctor’s intentions were in the burying and proclaiming of these items, we know the effect it had on the people. Fear. Darkness.

And thus it was expelled, this source of fear and darkness, with a shovel. The aftermath was beautiful. The community seemed to come alive and many came to help us with the construction. People from different nations, women and men, people who never attend church and long-standing members, old ones and toddlers, dark skinned and light, short and tall, weak and strong, all were there to help in the transformation of this building. Of course, the best part is, the building isn’t the only thing being transformed. We are too. Us, the people that God created and loves more than we can understand. We are being transformed, liberated by the love God has shown us through Jesus Christ. He is here: I can feel him, see him in the faces of my brothers and sisters, showing us how to love as he loves, completely, joyfully, sacrificially. And so we learn, a little more each day. May we never stop.